But often this means that we're part of the problem rather than the solution.

People come in to our UU congregations with wounds. Most likely, they aren't responsible for having received them. Those wounds came from other people, or our society. But the thing is, once the wound is in you -- like a piece of broken glass -- it's your responsibility. It has to be. It's in you.

That doesn't mean you have to do your healing alone. That's one of the beautiful, painful, wonderful things about a UU church. You're not alone. Yes, some of your healing may need to take place outside of the church, with a therapist or a spiritual director or some kind of a therapeutic group. But you have a place to come back to. You have a community to come back to.

I'm worried about our religious movement right now. I'm worried that we're about to repeat a failed experiment.

In the 60s, 70s, and 80s (okay, yes, before and beyond, even to the present in some places), people would come into our UU churches with big religious wounds, usually from having grown up in mainstream or fundamentalist Christianity. They were hurting. And we didn't want to hurt them further.

Going back to the broken glass metaphor ... it's like folks were walking in with big ole pieces of glass sticking out of their backs. But rather than try to help each other extract the glass, clean out the wound, do the work of healing, instead, we effectively banned all of the chairs with backs. Because someone might sit down on one and AIIIIGH! it would nudge the glass in their back, giving them a jolt of pain. 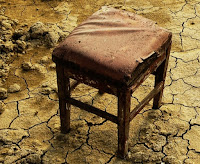 We stripped away anything that might trigger someone's religious wound. No religious language! No God, Worship, Prayer! It wasn't a sermon, it was a talk! No hymns, only songs!

We were proud of the way we could explore world religions. (As long as that didn't include Christianity, which might trigger someone's wound.)

We tried to protect people from pain, rather than working on healing. And so much of the time, when their kids grew up and left the religion, so did their wounded parents. They left, and that glass was still there, embedded further. Not only did we not work on their healing with them, we made it easier for them to just live with the wound. We were a safe place where they never had that wound brushed against.

Meanwhile, the people who didn't have that particular wound came in to find a religion that had stripped all religion out. Disappointed that the inclusive "big tent" of religion they'd heard about didn't exist, they went elsewhere.

We tried to make a safe space, where people wouldn't be triggered by having anyone brush against their wounds. This is a failed experiment.

I fear we are trying to repeat it.

People come to us now with other wounds. They've been on the receiving end of abuse, oppression, harassment, aggressions major and micro. Others have unconsciously soaked up the racism and oppressive messages our society gives, until it is an invisible wound within them that they continue to perpetuate. We need to find ways that we can heal.

But backless chairs are not the answer.  Telling people not to ask any genuine questions* or to discuss certain topics in public because it might brush up against someone's wound is a way of overfunctioning.

As a faith, recommitting to an ethic of personal responsibility is necessary to our healing. Again, you are not responsible for having received the wound. But once it's in you, you must be responsible for your healing. It's like the old joke: how many therapists does it take to change a light bulb? Only one, but the lightbulb has to really want to change.

How many churches does it take to heal a soul?

Only one, but the person has to be willing to be healed. And has to do the part of the work that is theirs to do.

If everyone commits to this ethic, we really could be the communities of transformation that this world needs right now. The man who doesn't want to hear any more "me, too" stories. The white woman who is being told that her beloved self-identity as "color-blind" is problematic. And the people who have been on the receiving end of oppression and are just so freakin' exhausted and they want everyone to BE THERE already.

Change and healing happen in community. And it's messy. We're clumsy. We make mistakes. We fail. We fall, and when we do, we bump up against wounds. Our own or others'.

On a basic level, we are a village of folks walking around with shards of glass stuck in us. Some large shards, some small. Some invisible to the bearer. Most of us really are trying to get the glass out, and get health around the wound. I can get awfully fixated on my own wound, but looking around and seeing -- really seeing -- that everyone has their own, well, it makes it easier for me to extend grace. I know they're extending it all the time, even when in pain.

A lot of healing can happen when we extend and receive grace. Not overfunctioning. Not getting rid of the chairs with backs. But the grace of humility and the grace of forgiveness. Rooted in the grace of love.

To Love the Hell Out of the World

January 27, 2014
To love the hell out of the world means to love it extravagantly, wastefully, with an overpouring abandon and fervor that sometimes surprises even yourself. That love flows out of you, sometimes slow and steady, sometimes in a torrent, sometimes filled with joy, sometimes with fierceness, or anger, or a heartbreaking pain that makes you say, "No, no, I can't take this anymore. I can't do anymore. It's too much ... too much." But it's too late. You've opened up your own heart, your own mind, body, and strength, and yes, it is too much. But there's also so much love that comes crashing down on you, gifts from the Heavens in the form of the smiles and cares from others, a giggle burbling up from a toddler's fat little belly, the soft, sweet smell of star jasmine catching you unaware, not knowing where it came from ... but it's here. And you're here. And just to live, just to exist, swells your heart with enough gratitude and love that you mu
2 comments
Read more

February 22, 2021
Last May, as it became apparent the covid-19 pandemic was not going to be a temporary affair, I wrote about the benefits of imagining you were shipwrecked on a deserted island.  Now, a year after we began hearing about the "novel coronovirus," I suspect that many of us have now entered the "Tom Hanks Eating Raw Fish" stage of the pandemic.  We've made the best of things. Rearranged home offices and homeschool desks. Got through the holidays, mustering as much joy as we could. There's a permanent hook or basket at the front door for our masks.  Most of us by now either know someone who died of covid, or are, at most, 2 degrees away. Our co-worker's husband's mother. Our friend's aunt. Or closer. We've grieved.  And now...we're just numb. We keep putting one foot in front of the other, because that's what we have to do. We eat, we drink, we sleep. We get our work done. We nag our kids to do school work.  But our affect is flat. Like Ha
1 comment
Read more