December 12, 2013
You may run into me on a Friday, in my neighborhood, so it's time I let you know what you might see. 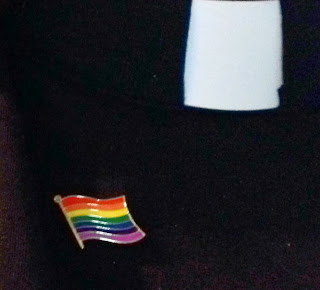 When I was doing my required unit of Clinical Pastoral Education (CPE), my supervisor suggested that any of us who came from traditions where a clerical collar was an option, take one "collar week," to see how we were treated, as opposed to wearing regular professional clothes.

After a couple of days, I joked to the Catholic priest, "How do you manage the power?"

In regular clothes, I would walk into a patient's room, and it would take about 5 or so minutes of introductions and pleasantries before we could really get down to talking about their feelings, their fears, the deep stuff.

With most people, as soon as that clerical collar walked in the room, with me attached, they began pouring out all the heavy stuff they were carrying.

I was riding the bus back and forth every day, and though not quite so dramatic, the collar effect was alive there, too. More people would chat with me, and they'd get "real" faster. Rarely was "How's it going?" answered with a polite, "Fine," as normally happened. People spoke about having a stressful time at work, or how they couldn't find their cat, or their joy because someone special was coming in town.

It was great ... and it was exhausting. At the end of the week, I confided to my CPE team that I was glad to take off the collar. As long as it was on, I was "on."

I never expected to wear one as a Unitarian Universalist minister, unless I was doing social witness.

That's the norm. We wear it in those situations because it's important to give a message that religious professionals are there, especially when so many times, (LGBTQ issues, reproductive health), the impression is that religion is only on the conservative side.

A few of my colleagues wear it, especially women, as a way of "showing up" in their profession. And the Humiliati wore it as part of their practice.

It Started As an Experiment.

There's a lot of "conventional wisdom" about the collar, among UU ministers. One that I heard many times is that it will turn people off, it will be a barrier. So after I was ordained, I decided to experiment. I would wear it out in my neighborhood, and keep a log of my interactions. I was just curious.

The first two or three times, I noticed some small things -- it seemed that people, especially among the more economically or otherwise marginalized communities -- were a little friendlier, a little more open to talking. But the collar has its effect on me, too, and perhaps I was just being friendlier myself?

The more definable result were the conversations I had with other women -- especially younger women -- about the collar. Was I a priest? No, a minister? A woman ... how did that work? What did people call me?

Well, I do live in the Bible Belt.

And Became An Act of Social Witness.

I wasn't doing it on any regular basis, I must admit. In regular clothes, I have the privilege of being invisible. But these questions, about being a women and a minister, prompted me to occasionally go out in my collar, in the community.

One day, I had to run several errands, including a trip to the post office. I kicked my rear (not literally, I'm not that flexible), put on the collar, and went about them.

At the post office, I futzed around awkwardly, looking for the right size box. The clerk at the counter waved me over, asked if he could assist me. He advised me on a cheaper way to ship, and helped me assemble the package. His co-worker joked, asking if I could give him holy water. The clerk said, “I don’t need that, but would you pray for me?” I smiled and said, Yes, and asked his name. His co-worker said to pray for her, too. I asked her name. When I left, I said, “Thank you, Ray.” And came home and prayed for Ray and Naomi.

So, It Developed Into A Spiritual Practice.

The spirit was willing, but the self-consciousness made me weak. It's just so much easier to be invisible. I'd go out sporadically,  have an experience that made me mentally promise to be more regular about it ... but life just keeps happening, busy schedules, things to make happen, ministry to do ...

And then I heard about a teen in my area, who was gradually coming out as gay, exploring trans*. Hadn't told their parents, don't know how they'll react. Someone told this teen about Unitarian Universalism - they went online, read about it, and were blown away that not all faiths are anti-gay.

In some places, this is still a shockingly new idea that people have never heard of.

There is a Starbucks across the street from my kids' high school, where they often congregate after school. I decided I'd collar up with a rainbow flag pin on my shirt. I didn't expect any teen would talk to me -- I'm still an adult, after all. But I figured I could sit by the door, just taking care of some work on my computer, and maybe, just maybe, the juxtaposition of the collar and the pin might introduce the idea into some teen's head that "Hey, maybe religion and gay aren't enemies." Maybe even, "Hey. Maybe God doesn't hate me."

So, I didn't expect any confirmation. But sometimes we do things, even aware we'll never know if it made a difference. That's faith, I guess.

I was waiting for my lime refresher when the girl standing next to me said, "I like your flag pin."

She said it, but her face looked doubtful. It was one of those rare times when I'm pretty sure I could read her thoughts. Does she know what that pin she's wearing actually means?

I smiled at her. "I think it's important, especially in this area, to send a message."

I watched her eyes bounce back and forth between the pin and my collar.

"I'm a minister, a Unitarian minister. We're an LGBT-friendly church." I rethought the words. "Mmm, LGBT-welcoming?"

"LGBT-friendly is a good term," she said. She squinted at me. "You mean, your church is okay with gay people?"

"Mmm-hmm. Some of our ministers are gay, too."

She blinked and it seemed apparent this was a brand new idea. We had a conversation of a couple of minutes as she clarified that yes, I really meant it, it was fine to be gay at a Unitarian Universalist church.

"What's the name of your church? My mom has been wanting to go to a church."

I told her, and mentioned another in the area.

She repeated that her mom wanted to find a church. "We've been to a couple of churches ... but the kids were mean to me. Because I'm gay."

I told her that I was so sorry. That that should never happen at a church. That it would not be tolerated at one of our churches. Not at my church, I emphasized, conscious of the collar I wore, conscious that it represented, to her, an authority far beyond me.

She asked if I could write down the name of my church. I handed her a business card. She read it slowly, standing there.

That's When it Became a Discipline.

Every Friday afternoon, that's where I am. I take my ipad, catch up on emails and whatnot.

What makes that a spiritual discipline? my mentor asked.

As I mentioned, when I started my St. Arbucks ministry, my only thought was about presence. And I still think that's important. It's not about me being there. I am merely representing something -- church, God, religion, spirit. With a message of inclusion.

But my experiences have taught me that it's not just enough for my body to be present, I have to be fully aware. Which frankly, is not always one of my strengths, especially if I'm working on something else. I can have deep conversations with someone and after they leave, if you ask me whether they were wearing glasses, or wearing a red shirt, I'll look at you blankly. Not very observant.

It's like an exercise in spiritual peripheral vision. Being casual, certainly not staring at people as they walk in ... yet being aware, so that if someone wants to begin a conversation, I'm open and willing. It's not easy. My own teen was sitting near me one Friday and hissed, "MOM! That guy just said he liked your pin!"

And that's usually how the conversation begins. "I like your pin," they say. Sometimes, that's the end of the conversation. Sometimes not. "I like your pin," said a boy the other day. "Thank you," I said. He turned to a girl sitting by him. "She's a minister, but she likes gays." The girl smiled at me, and with a British accent told me that in her country, gay marriage was legal now. We talked a bit, the three of us.

I often wear the pin on regular clothes. I get smiles, but it's not the same.

It's the collar and the pin. Religion and inclusiveness. God and gay.