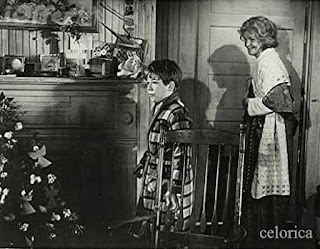 It’s all the fault of A Christmas Memory. That was a wonderful adaptation of a short story by Truman Capote made for ABC Stage 67 before I was born. Every few years or so, they’d show it again on television. It was both magical and homely. It starred Geraldine Page, and the narration was done by Truman Capote himself. His voice was so high-pitched that they had to slow down his recordings in order to lower his voice. Such a beautiful, poignant, real, story, with Buddy and his elderly cousin Sook, and her marvelous fruitcakes, augmented during prohibition by the booze sold by Mr. HaHa Jones, and sent off to friends far and near, and even the president.

It was enough to make you want fruitcake.

This holiday touch of magic evidently imprinted itself upon me at a crucial age, like when you walk away from a duckling, and the baby duck decides it will follow you for life, no matter how clichéd, insipid, or commercial you are.

What I've discovered is that they give us some alarming insight into what Hollywood thinks about women. Is it actually Hollywood, though? I think most of these must be made in some low-budget area   somewhere else. The big difference between theatre holiday movies and tv holiday movies are the budgets. TV movies are usually filmed in California, so they boast sunshiny Christmas days while theatre movies can spring for location shoots or better special effects, so they always happen someplace snowy. Also, theatre movies have actors like Jim Carrey or Kate Winslet, while tv movies feature “Oh, oh, I know this person … um … um … oh yeah, they were on Family Ties/Clueless/Beverly Hills 90210/are Fred Willard.”

Men apparently hate Christmas, as it is rare nowadays to find a Christmas Made For TV Movie (CMFTM) that is not explicitly targeted to women. Or children. Or a combination thereof. Or ... maybe the producers are conflating the two?

Really, after watching so many of these CMFTMs, it seems that's a valid argument, that the producers think women are just like kids, only with more spending money. And shallower. And meaner.

But I'll talk about that in a later post.