I had already cried. Cried when I watched the reports of the bombings at the Boston Marathon. Then dried the tears, and began working fast, earnestly, with Meg, Lynn, Lara, and Tim to put together a prayer service so that Monday night, we would all have an online place to gather, to be in religious community. Bless you, musicians, for your songs. Bless you, the community that showed up, to bare our pain together. Bare. Not bear, as Ric Masten corrected.

Those nails pierced my grief, taking me to that place of just total incomprehension. 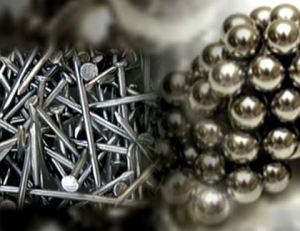 What did it feel like, holding those nails in your hand? Did you touch them, or just open the cardboard box and drop them in? Perhaps you thought if you didn't touch them, they would leave no blood on your hands?

But you chose them. You chose them, because you didn't just want attention, you wanted those nails to explode, to drive into flesh, to maim, to kill.

There are some who already, or from the very beginning, had hearts of compassion not only for those hurt, but for the person(s) behind this. They prayed that the killer might find a way to the love ethic that they themselves feel. They felt sorrow that anyone might hurt so much they were willing to do this.

I am not so spiritually advanced.

I don't want vengeance, but yes, I want justice. I want a court of law, and a jury of peers, all of that. I want answers.

And yes, I am angry. I am angry that this type of evil exists. The type of cold, calculated evil that allows someone to drop nails and ball bearings into a pressure cooker, a pressure cooker that goddammit should be used for putting up peach preserves to give to all the people you love, and then figuring out where to put that pressure cooker for maximum impact, maximum pain. Nails tearing the flesh of children, of friends and family.

I am an angry person and I sing so that I may remain a gentle person. I sing so that this incomprehensibility will always remain that, that I will never understand the feeling that would allow this evil to invade my soul.

Perhaps Psalm 137 is a warning. They were so hurt, so wrecked, that they hung their harps upon the willows. They couldn't, or wouldn't, sing. And they became a people who fantasized about dashing the babies of their enemies upon the rocks.

Perhaps we should sing for our lives.