March 13, 2018
There are things we just know to be true. Like that you need to sear a steak before cooking it, to seal in the juices.

We all know that throughout time, there has been and continues today to be a war between religion and science. We all know this to be true. 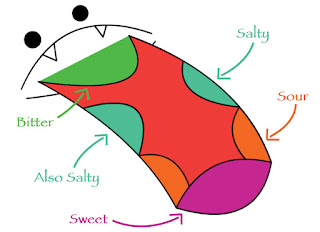 You know something else we all know to be true?

Remember that? Back in elementary school, you were shown a picture of a tongue and you were taught that different parts of the tongue corresponded to the four different tastes. The front tasted sweet. The back tasted bitter. The sides were sour and salt. My parents were taught this. I was taught this. And still today, my kids have been taught this. This is one of those things we all know to be true.

Except it's not. It’s not! It’s been thoroughly debunked. And not recently. Since 1974. When Virginia Collings confirmed that all parts of the tongue can register all tastes.

Sometimes, things we know to be true, aren’t. We have a hypothesis, we do the experiments, or the research, we analyze the results … and if it disproves our hypothesis, we change our minds, right? This is what thinking people do.

If your brain wasn’t already blown about that whole tongue thing – mine was, when I found out – well, take a deep breath. Hold on to your hat. Engage in whatever metaphor works best for you in order to possibly change your mind about something.

The War Between Religion and Science … never was. And isn’t now. Yes, there are ancient incidents such as that with Galileo and modern stories such as the Creation Museum … but research shows that these were and are significant for being outside the norm.

In the 1800s, there was a theory called the “Conflict Thesis” promoted by scientist John Draper and writer Andrew White. They claimed that science and religion could not get along, should not get along. Draper wrote, in error, that the history of science “is a narrative of the conflict of two contending powers, the expansive force of the human intellect on one side, and the compression arising from traditionary faith and human interests on the other.” White wrote a book called “The Warfare of Science” where he pitted religion as a force that deliberately sought to squelch science and research. Science and religion were pitted against each other. The thing is, when Draper and White came up with their Conflict Thesis, scholars even then debunked it. James Walsh wrote that most of this supposed war “is quite imaginary…only those who know nothing about the history of medicine and of science continue to harbor it.” (1)

But the idea had been planted and there were certainly examples such as Galileo and anti-Darwinism that seemed to support it, as well as a strong anti-Catholic prejudice, especially emphasized by White. But by the 1970s, the thesis had been thoroughly debunked among scholars but among the rest of us, it was planted in our brains as “truth,” even those of us who know that anecdotes do not make for good, solid research. And what makes the headlines are conflict and controversy … not people of all faiths embracing the continuous revelation that is science.

If we truly believe in science, believe in the scientific method, then we need to go deeper than the stereotypes of religious people being anti-science.(2) Deeper, indeed, than the news stories that lead us to believe that we are a tiny intellectual voice, crying out into an ignorant, anti-science wilderness. Those stories about religious, anti-science people? Oh yes, they can be true. But they are not the majority. Not even close. And they never have been. Being thinking people, we have to be willing to change our minds, right?

Elaine Howard Ecklund, Professor of Sociology and director of Rice University's Religion and Public Life Program, released a study -- Religious Understandings of Science -- that shows that “The public’s view that science and religion can’t work in collaboration is a misconception that stunts progress.”

For those of you who like statistics, here are some of the results of that research:


And this wasn’t just a one-off study. A Pew Research study reported similar results in 2009.

Look, it can very satisfying to give in to snarkiness, especially when we often see examples all around us of people who outright refuse to believe in good scientific scholarship. Because there’s some really bad science out there used to justify things we find abhorrent. Refusing vaccinations, cutting access to birth control, bigotry in all directions, and of course … refusing to believe in the global climate crisis.

We can’t give in to that feeling. Now is the time to be building and cementing relationships with other religious people, not assuming the worst of them.

Oh, and searing your steak to seal in the juices? Yeah, that's a big ole myth, too.


--
1: Walsh, James Joseph, The Popes and Science; the History of the Papal Relations to Science During the Middle Ages and Down to Our Own Time, Fordam University Press, New York 1908, p. 19.
2: To start with, we Unitarian Universalists are, in point of fact, religious people. I’m pretty sure ours is the only religion where a person can go to church every Sunday for 30 years, serve on the religious education committee, the worship team, and the Board, and look you straight in the eye and say, “I’m not religious.” We are a religion. We are religious people.