September 04, 2018
TL;dr -- Our church does "Whole Church Worship," or "All Ages Are Together for the Whole Service, Every Service, Every Week." I've been getting a lot of questions about this. Here are some answers.

Preface: For some reason, I occasionally run into people from other churches who want to explain to me all the reasons this won't work at their church. Sure. I'm not trying to talk you into this. You do you, Bub. Whole Church Worship is working at our church, at this time. Live Oak is pretty special, and I don't know that there are many things we do that would work any other place, including our Chili, Chocolate, and Karaoke Party. But that's a post for another day.

So, I first got involved in Whole Church Worship as a result of a fit of pique - my own. This was before I was a minister. At my home congregation, we had "Children's Chapel," and we had reached the point where we couldn't get anyone signed up to coordinate it. Well, FINE, I said to my friend John. "We'll just keep the kids in the service THE WHOLE TIME, and then I betcha someone will sign up!" We nodded shrewdly. This was going to be a Big Fat Mess! Whoo-hoo!

Some of the kids sat with their parents. A bunch of teens sat together. Some little kids sat with other adults, especially a church "grandma." Parents started reporting interesting discussions the whole family had in the car on the way home, based on that day's service. Older adults said that, huh, the kids really weren't disruptive in the service, and in fact, they liked having them in there.

Well, that was a head-scratcher. But we went with it. And as some of those kids started getting older, we put them in positions of leadership at the church. One continued being involved, and a leader in Unitarian Universalism outside our walls, as he became a young adult.

We were moving to two services, so we decided to have two worship services, both of them "Whole Church," with a middle hour of religious education classes for children, youth, and adults. Because one of the other things that bothered us was the assumption that worship was for adults, and religious education was for kids. We all need Faith Development.

Before the change, we talked about what this would mean. A LOT.

We talked about the most important aspect: WHY? The "why" here had many parts:
And the biggie:
We knew that this was a three-legged stool, and in order to work, we'd need a critical mass of support in three areas in order for this to work. (Critical mass but not unanimity.)

Leg One: Worship. The music director and the minister had to be willing to think through the service and make necessary changes. As a church, we talked about what we wanted. We didn't want to dumb the service down. We didn't want every Sunday to be like those special services that are called "intergenerational," but are really, "children's services, and some adults come, too." But we wanted services that at least part of the time, would perk up kids' interest. Some illustrations they could relate to. 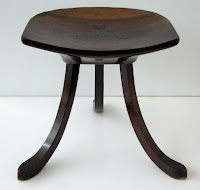 As preacher, I talked to the parents and told them that I didn't want to have to censor the subjects I talked about, but I would try to do it in a way that was sensitive to younger ages. We agreed that rather than protect our kids from things, we should strengthen and empower them.

Leg Two: Parents. Look, if a critical mass of parents don't support this, it's isn't going to work. Little Johnny is going to start acting up in the service, and Parent is just going to shrug. We talk a little about "worship behavior" in their classes, but 99% of teaching that comes from the parents.

My attitude is pretty much that if a kid is bored, adults are probably bored, too. (Maybe it helps that I'm a 7 year old, cleverly disguised as a grown-up.) But the difference is that adults, for the most part, will sit politely while bored, and kids might not. The parents said they felt there was going to be value to the kids even if the words were just flying over their heads. They'd have coloring boards and fidget bags. (I think this is extremely important. If you embark on this, you have to accept that sometimes, the kids may be bored. And that's okay.)

We took a deep breath, and jumped in.

The service probably doesn't look that much different from yours. They had already been using a video screen for lyrics and such for a long time, so it was easy for me, the preacher, to throw up more pictures, and occasionally to use a video clip from a movie or kids' show. Our music director began asking older kids to be song leaders. I've begun asking them to do readings, and plan to do more of that. The whole church benefits, because hearing a 10 year old read, "Nothing Gold Can Stay" or Ecclesiastes 3 breathes new life into familiar words. 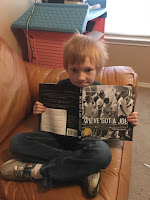 We've had some surprises. After I began using short video clips from recent kids movies as illustrations (because man, some of those will PREACH), some of our older members who weren't familiar with the movies sidled up and confessed that really liked it when I did that. And parents were surprised when their kids, who never looked up during the service, later brought up something they heard that day.

As preacher, I was reminded of the power of a great story. One of the first Sundays after we began Whole Church worship, I used no videos, but just told the story, in detail, of the Children's March in Birmingham. Our kids (and adults) were enthralled, especially one normally rambunctious little boy who went home and found a book all about it. 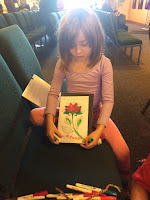 Even when they weren't paying much attention to the service, there were other things that made it worth it. One little girl was listening during Joys and Sorrows, and heard that a member, who is a transgender activist, just got engaged. She spent the service coloring a picture to give her as a gift.


Faith development is all we do. Unitarian Universalism is the faith we teach.
The congregation is the curriculum. -- Connie Goodbread

Parents take their responsibility seriously. There is an understanding that they help each other out, and it's not unusual to see a parent lean over the first row (where a lot of our kids choose to sit together) and correct someone else's child, while the child's parent nods gratefully.

Is it perfect? Ye gods, no. Some Sundays, I'm convinced a rogue Baptist has slipped all the kids caffeine pills. But we learn, we adjust, we grow. We're "always in Beta," to quote my friend Rev. Meg Riley. I want to find more ways to incorporate all ages in the worship service. We need to find a way to bring together seniors who want to help young parents but don't want to impose, and parents who want help, but don't want to be a burden.

And maybe, more than anything else, that's what makes us truly intergenerational.

Note: About 8 months after beginning our Whole Church approach, this church hired our first full-time Director of Lifespan Education, Carrie Krause. Her support and guidance for the worship aspect has been invaluable. At her suggestion, our orders of service include "questions for family discussion" drawn from that day's worship and religious education classes, and every week, she works with the music director and myself as we plan out the service. This September, along with the class covenant, the Elementary classes will discuss creating a "worship covenant."

There are two beliefs that undergird Whole Church worship, and they are that a) worship is for everyone and b) faith development is for everyone. During this past year, Carrie has been experimenting with having a Middle Hour in which all ages have a religious education experience for everyone, all together. This next year, we'll be working to further integrate Worship and Religious Education. More reports to come ... because we're always in beta.

*All photos used with permission.