You are not coming to a CMFTM for originality, or if you are, you'll be pretty disappointed. They're making these babies on the fly, baby, Time is Money, so who has time for originality? As such, most CMFTMs fall into certain oft-used-and-abused genres. Someone even made a handy bingo scorecard of Christmas movie tropes.

Today's genre is "I Want to Schtup Santa Claus."

This is an interesting genre of holiday movies that seems targeted to Gen X – Boomer females. Why does this appeal to us? I conjecture it’s because of the stop action animation special, “Santa Claus is Coming to Town” in which a scarily thin Jessica-the-Teacher meets Kris Kringle, he gives her a doll, they get married by the Winter Miser and then she’s allowed to get nice and fat, and he still sits next to her, seemingly still in love, and eternally celebrating Christmas, but without bills or family members, or any of those other pesky things that make Christmas, let’s face it, a bit of a drag. It is a blissful scenario, I must admit.

So, in this genre, Santa Claus is unmarried, young or youngish, and looking for Mrs. Right Claus. He's never the fat, old Santa that we remember, because, ew, that would be creepy. No, slim him down, take off the beard, and all's fine at the North Pole.

(Oh, except they're not set at the North Pole, because Santa has to go out into the world to find Mrs. Claus.)

Spoiler Alert: Santa Gets the Girl. And then there's a sequel. 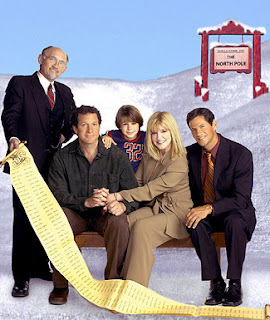 Example 1: Single Santa Seeks Mrs. Claus, starring Steve Guttenberg and Crystal Bernard. Santa is retiring, and his son (the Single Santa) must get married or ... or ... well, something about how then there wouldn't be the Santa magic. I was a little unclear on that. He and "Beth" have the meet-cute, there's some electricity, some messages about morality in toys, true love ... and the all important subtextual message: Women work because they have to, and what they really want is someone to sweep them off to the North Pole where they can concentrate on being wife and Mom.

I actually don't mean that in a snarky way. (This time.) I chose it at one time in my life, and I'm grateful I had the opportunity. (Concentrating on being a mother, not going to the North Pole.) There's a lot of women in jobs to pay the bills for whom this is a big part of the fantasy. No more clocking in. Bliss.

The disturbing part is that this message seems to come up again and again and again. So much so that I'll make a tag for it: SAHM Fantasy. A woman have a job she loves? A calling in life? Pfft.

Is this movie worth it? Eh, maybe. It has some cute moments. It also has some excruciatingly bad moments, such as Steve Guttenberg trying to make "Ho Ho Ho" sound like a genuine laugh, or his frantic distress when it seems he'll lose Beth. That's just painful for everyone, and not because of the storyline. 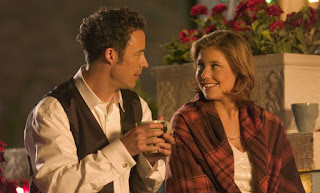 Whereas Single Santa is bright, loud, and full of scenery-chewing, Snow is quieter and more muted. It stars Tom Cavanaugh and Ashley Williams, with some charming side storylines; one of these includes the always wonderful Jackie Burroughs, may she rest in peace.

The female protagonist/romantic interest, Sandy, is a more nuanced character than Beth in the aforementioned movie. She's smart, she's strong, she gives Nick a serious ass-chewing for crossing  boundaries and rooting through her stuff. An extra half a point for having a couple of non-white characters. Not many. But at least it isn't snow white, the way most of these are, pun intended. And in the end, when the inevitable happens, Sandy isn't using Santa to escape an unhappy life. She has a good life. She doesn't want to leave it. And there's no coercion/guilt involved, (see: Santa Clause 2, Single Santa) no threats that if she doesn't say yes, Christmas Will Die. She says No, Nick is sad, but accepts her right to decide her own fate.

In the end, love wills out. Which I'm okay with, because yeah, love does mean making choices, whether you're marrying Santa or the person who gets a fabulous dream job, requiring you to leave yours.

If you're going to watch one, pick Snow.