Waters Give, Waters Take Away

August 30, 2017
There are no baby pictures of me. Not that I wasn’t loved; I was. But my Dad took only slides, which are not made for easily passing around. When he and Mama retired and began traveling, the slides and most of their worldly goods were carefully put into climate-controlled storage.
Climate-controlled doesn’t mean flood proof.

Which hurricane was that, I ask Mom. Rosa? We can’t remember.

Water has always been a part of my life. Dad was a fisherman, so every vacation, we were somewhere with water. The Texas coast, Florida, Colorado mountain lakes, creeks in Canadian campgrounds. Weekends on East Texas lakes. In some primal way, it feels like water was my first language. In those long-gone pictures, there were slides of me as an infant, covered with an umbrella on a beach on the Gulf of Mexico.

Growing up on the coast, hurricanes have always been part of my life, too. Little details still swim around my brain. The tape residue that never could be completely removed from crisscrossing our windows during one. The boyfriend who came over to help us saw up all of the trees that fell during Alicia.

Happiness and heartbreak. Water. It was by the banks of the Pecos River that I shed the tears of a particularly bad time of my life and was healed. It was in that same river that God spoke, telling me I was ready for the ministry.

At the end of the difficult, hot, transformative summer of chaplaincy, I packed my kids and spouse in the car and we drove to the icy cold springs that my grandparents swam in. I could feel them swimming with me. I left, refreshed. Replenished. 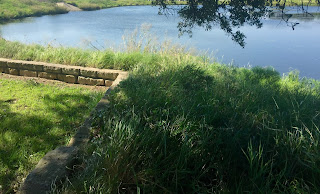 The BFF-DRE shares my love of water. Last year, when she came for a visit, she had just one request. She needed to go somewhere that she could wade in a creek. I knew just the spot.
How many water memories do we have, she and I? Like the time my little one was so sick, and she rowed a boat out to the middle of a lake in Wisconsin, because that was the only place she could get a cell signal? Swimming in the big lake in Oklahoma with our babies, then in another big lake in Oklahoma years later. We decided we needed a ritual, a baptism of sorts. All hell broke loose. There are certain things you shouldn’t mention at a UU summer camp.

I have outrun hurricanes that never happened, and stayed put for one that did. I don’t recommend either, but there’s really no other choice. One or the other.

I went for a walk today. Breezy and mild, the oppressive heat lifted for a bit. Blue skies. Sunshine. Dry pavement. I walked around the pond, enjoyed the little waterfall. Saw one of my beloved turtles pop up his head, see me, then swim down deep. 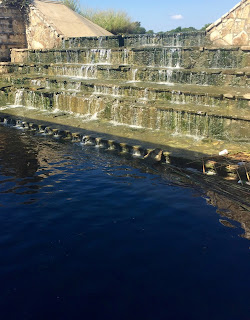 Barely 3 hours away, the BFF-DRE was being evacuated. After all these long days and nights of Harvey, it was at the very end that her house flooded. 1 spouse, two sons, 1 dog, 1 turtle, and she were helped out and to a friend’s house.

I am the sentimentalist, she is the realist. My favorite Christmas movie is It’s A Wonderful Life. Hers is Die Hard. Really, that kind of tells you everything you need to know about us.

I am cursing on her behalf, praying rosaries of invective.

She would roll her eyes. AnnoyingNotTragic, she hashtags.

And it will be a long road of insurance claims, ripped up carpet, the smell of mildew. TAKE TEQUILA AND CHOCOLATE TO KATY, I write on my pad, making my to-dos.

“It is ridiculous to be mad at a storm,” a friend of a friend wrote, commenting on something I’d written. Oh, Friend of a Friend, I completely agree. But feelings tend to be ridiculous on the whole, I find. I am often quite ridiculous in my feelings of joy. Why happy when so much destruction is all around? I don’t know. Just wired that way. I try to separate out my thoughts from my feelings, differentiating them from each other.

I step over a stream, shortcutting my way around the pond. It flows on merrily, as if its brother has not traumatized millions of people downriver.

How long til she wants to wade in a stream again?

“The Lord gives and the Lord takes away,” Job said. And water gives, and water takes away.