Pain is Inevitable. Part 4 of 5

We don't want people to hurt. Some people can find strength in pain, but for others, it weakens us. It distracts us from important things. And so any compassionate person would want to protect others from pain.

In western civilization, we have gone to extremes with this. At one time, it was believed that denying emotional trauma was the healthiest answer -- if a child lost a parent, they were discouraged from talking about it, a soldier returning from war was told to just get on with their new life, a person who had been raped was told to forget about it, never think about it.

And, the pendulum swung the other way, with therapy that involved going over and over and over the trauma, the idea being that the person would somehow "talk/cry it all out" and be done with it, rather than learn coping mechanisms for how to deal with the unwanted memories.

Outside of formal therapy, we who want to help our friends have followed those trends, either studiously avoiding the topic, or urging the friend to tell us all about it, sometimes against what they wanted.

The thing is, there is no way around the fact that pain is a reality. It is inevitable. The second part of that common statement is the Buddhist belief that "suffering is optional," but I will pass that part over to actual experts in Buddhism. 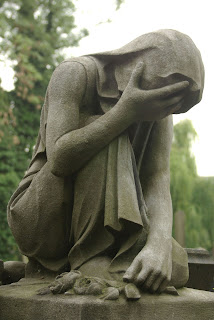 But pain is inevitable, and despite all of our best, often unhealthy, attempts to eradicate it, it's here. And oh, how we try to avoid it! Both in ourselves and in others, we are afraid of pain, and so we do everything we can to get away from it. We try to avoid hard discussions, conflict, truth-telling, and dealing with our own wounds. "I'm fine with the glass splinter in my arm. Get those tweezers away from me!"

And people have the right to do so. They get to make their own decisions. And they may decide to step away. To not attend certain church services, to not get on Facebook on certain days, to not read certain social media threads or comments.

The problem is when we try to protect others from pain.

Taking responsibility for the feelings of someone else often feels noble and generous.

Trying to take responsibility for the feelings of another person means we are crossing boundaries and attempting to control them.

Our motives may be good. We may have the best intentions. But the result is that by overfunctioning, the other person will usually underfunction. We are taking away their own agency. We are trying to impose what we want on them. "But I just want you to be happy!"

Not your job. Get back in your own dance space.

A reminder: declining to protect others from pain does not mean you have permission to go be mean to someone with impunity.

This is not a simple thing. It is loaded with complexity and there are no easy answers. Right now, we want easy answers, e.g. do no harm. But even that is loaded with difficult questions. What is harm? Is it entirely decided by the person who claims to feel harm? We are living in a world now where people weaponize their pain in order to manipulate a certain outcome: the baker who claims making a wedding cake for a gay couple harms them because it goes against their religious beliefs. The person who says being greeted with "Happy Holidays" is painful because it ignores their Christian identity. Every three year old everywhere being told they're not allowed to eat cookies before dinner.

Pain can be weaponized. And if we're honest, we've probably done it ourselves.

We learn lessons through our pain. (Note: this does not mean we learn good or helpful lessons necessarily.) Those lessons were so expensive for us, that damnit, people should recognize our expertise!

Sometimes that expertise is valuable. Because the voice of lived experience is powerful.

And even then, it's not as simple as "prioritize the person with the lived experience of pain." Because there's all kinds of pain. "A broken heart is a broken heart. To take a measure is cruelty." (Yes, I'm quoting Scandal.)

In the song mentioned at the top of this post, The Cave, there is also this line that I considered posting:
"I will hold on hope and I won't let you choke on the noose around your neck."

Someone might say that a quote referencing "noose" should never be used outside of the context of lynching, because that has been (and continues to be) such a horrific act of terrorism against African Americans. That is true. And we shouldn't (in my opinion) casually use terms that carry such a weight of pain.

And ... when I was 10 years old, I learned one of the quirks of English is that proper usage would be to say that a person was hanged, while an object was hung. And the reason why I know that odd bit of grammar is because my brother hanged himself in an act of suicide.

So that line from The Cave has a deep, painful, meaningful message to me.

And that line has a deep, painful, meaningless message for others.

Can't we see this "pain vs. pain" playing out in a well-meaning church somewhere? Where one person questions the use of the lyric, and another tosses her experience of a dead brother as a trump card onto the table of discussion?

So what do we do, knowing that pain is inevitable, and that perhaps "do no harm" is not only futile, it's not the best way to make decisions?

That is the power of having guiding principles.

Making decisions from guiding principles means that we're investing responsibility in what we have control over, and are being guided by our deepest values.

Because then we have to prioritize one.

And most likely, we will have to decide which one is the priority according to the particularities of the situation in front of us.

There are no easy answers here. And there aren't supposed to be.

Easy answers are for fundamentalist thinkers who ground themselves in rigid dualistic thinking and blow off nuance and complexity as moral relativism.


Tomorrow: It is Well with My Soul


Related Post: Recommitting To An Ethic Of Personal Responsibility Or"Backless Chairs Are Not The Answer"