June 19, 2020
Today is "Juneteenth." Being a Texan, albeit a white one, it is an anniversary I've known about my entire life. I grew up in Houston, where there were special Juneteenth concerts at Miller Outdoor Theater, there would be a celebration at Emancipation Park, there were neighborhood parades, I think I even remember Astroworld doing something. And the full history was known - this was the day when the news finally got to Galveston about the Emancipation Proclamation. 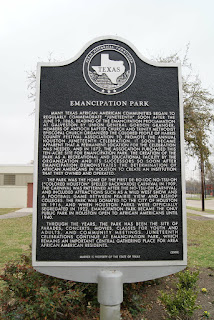 As our Black friends celebrate the day, I hope that white Texans will think about how Texas continues to delay justice. I (cynically? Or is it just realistically?) wonder how much the lesson that was absorbed in Texas was that "hey, but the slave owners snuck in one last harvest."

How does Texas continue to sneak around, doing what is illegal and immoral, finding tricks to delay justice?

It was 900 days between the Emancipation Proclamation becoming official, and the news getting to Texas.

How much evil can be done in 900 days? How much injustice?

The answer to "How long?" has often been answered by Texas with "Just a little longer."

Justice delayed is justice denied. May Juneteenth be for white Texans a day of shame and repentance.

In honor of Juneteenth, please consider a donation to:
The Innocence Project
Austin Justice Coalition
Houston Museum of African American Culture
Center for the Healing of Racism